Kaitlin ServantAugust 4, 2015March 11, 2017 Restaurants No Comments
Before we had time to decompress from the show, we were off to the Cape for a lovely much needed getaway! That gave us a little time to reflect back on the show. 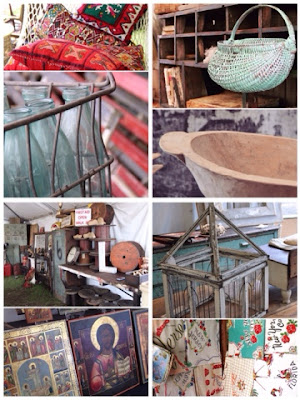 It’s almost impossible to sum up any Brimfield show in a way that everyone agrees with. The show is so big and means different things to different people. When you get around the entire show as much as we do, it becomes clear that everyone really does experience it differently. Most dealers have their own set of July-specific expectations. Although the show did seem fairly typical for July, we did hear from quite a few of our dealers that the show surpassed their expectations and sales rivaled a May or September show. Those dealers were very happy! Others were not as pleased. And the heat and humidity always makes some people a little cranky.

Shoppers were definitely enjoying themselves though! Crowds were pretty typical for a July show and they seemed to be buying. As one of our dealers pointed out, if they come in July and are willing to put up with the heat, they are serious buyers.  That particular dealer was having a decent July show up until the last day, then a client showed up and bought almost all the rest of her pieces making it a great show for her. Those are the stories we like to hear!

If there is one thing the July 2015 show will be remembered for, it will definitely be the moths! They were everywhere. This area definitely had an infestation of caterpillars this year, and last week seemed to be prime time for them to complete their transformation! I suppose if the show was going to be overrun with insects, moths would probably be my first choice. Some of them were downright cute!

Well… My only #brimfieldfinds at the #textile show today was this mix of bunny/moth butterfly. We chatted for a bit while he sat on my windshield. #brimfield #brimfieldf2015 #brimfieldantiqueshow #amazing #iheart #mothernature #coolestthingever #blownaway by the #details ???
A photo posted by Johanna Rosas (@beyondchic) on Jul 13, 2015 at 5:22pm PDT

This was a unique show for us as well. It was the first time bringing our newly-renovated vintage camper. We loved having it there! It really helped make the show more bearable for the girls. And having a fridge with cold drinks and food was nice for all of us. Our new awning provided shade and it was a great place to invite friends to escape the heat. We are hoping to find a more visible location for the September show (stay tuned for details!) but we can’t thank Dave Lamberto and his team enough for being so good to us all week. Hertan’s is a special field and it really does have a family atmosphere, great dealers and the best shade in Brimfield!
The July show was also our first since starting this blog. One of the reasons I started it was so we could promote the app, the show and our dealers in more depth. I was really pleased to be able to publish five separate dealer profiles during the show (Rustored Salvage, Juniper Hill, Walker Homestead, Juniper Vintage and Heja Home). I may need to do a little more pre-planning so I’m not writing them at 2am every night during the show. But besides that, I think they accomplished what I was hoping to. And I was able to stretch my photography skills a bit which was really fun for me. There is still a lot of room for improvement but it’s something I hope to continue doing in future shows. 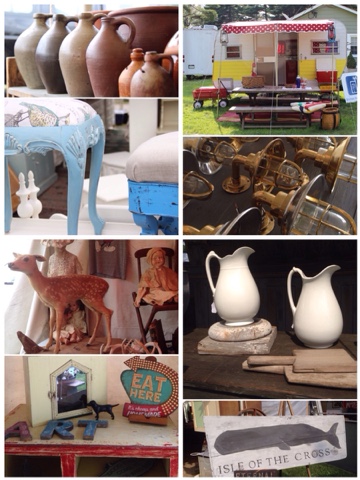 While we didn’t sign up as many new dealers for the app as we had hoped, we were very happy with the show. We made a lot of new relationships during the week that should have a profound impact on the app in the future. We can’t say too much yet but we are working on some big things for September and beyond! We also had our best download day on the Saturday of the show: 250 downloads in one day! Our numbers are steadily increasing with each show. We have had over 7,000 downloads since launching last May and a total of 17,000 individual searches within the app since we started tracking that in September.
We also received the most positive feedback during this show. So many shoppers came up to our booth just to thank us for making it because it helped them find what they were looking for. That’s exactly why we made it! The more shoppers who leave the show happy, the more likely they are to come back show after show and year after year.  Dealers and field promoters are starting to realize how valuable this is!
Overall, we ended this show very tired but very optimistic about what lies ahead for our little app, our dealers and the show in general! Thank you to everyone who has supported us getting to this point. See you in September!
Antiques, Brimfield, Flea Market