Kaitlin ServantSeptember 30, 2015March 11, 2017 Restaurants No Comments
They say that March comes in like a lion and out like a lamb, but what do they say about September? It seems equally transformational. It’s hard to believe that less than 30 days ago it felt like Summer would never end and now beach days are a hazy memory. At least for us.
We had a wonderful summer. The girls are at such fun ages (I plan to say this every year for a while and I will mean it!) and we spent a lot of time at the Cape and New Hampshire with family and friends. During one of our Cape trips I collected flat stones on Sagamore Beach to make story stones for the girls. They were so easy and fun to make and they were a big hit!

If you have never seen story stones before, they are simply just stones with images drawn or painted on them and they can be used by children (or adults, as we found out) to make up stories. I had seen them on Pinterest for years but just never got around to making them until this summer. I have a board with quite a few pins if you are interested in making your own.

I really love how open-ended they are. We try to limit screen time as much as possible (and sometimes it’s more possible than other times!) and these are great to pull out as an alternative. They have also saved our sanity at restaurants a few times. The girls love playing with them by themselves but they really love it when we get involved. Sometimes we will all take turns choosing a stone and adding to the story. There is no wrong way to play with them!

I used oil based Sharpies for mine and found that they worked great. As they have been bounced around rubbing against each other for the last few months some of the images have faded a bit but I can touch them up as needed. I can also make new ones whenever I want! I have a big bag of extra blank stones to get us through the winter. Just today I was asked to provide some with sad, angry and happy faces and I would like to make some holiday or season themed ones as well. They would also make a great gift.

I’m not really very artistic so I think anyone could make these, but if you would prefer to buy some there are some adorable sets on Etsy. Here are a few of my favorites and I have a bunch more pinned in my Arts and Crafts board on Pinterest: 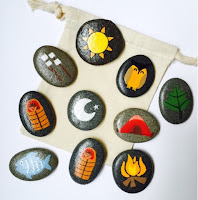 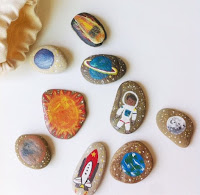 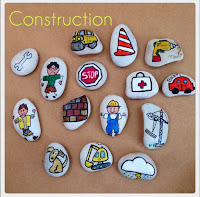 If you have your own story stones I would love to see them or hear about how they get used at your house.
Thanks for following!
Kaitlin
DIY, Frugal Toys, Kids Toys, Story Stones